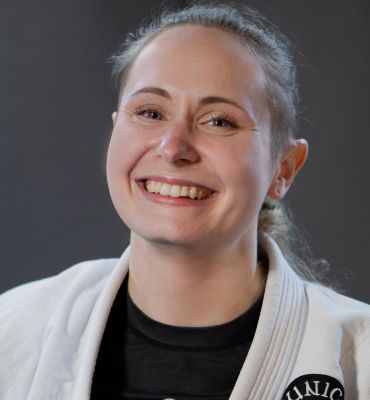 Sammy was born in Las Vegas, but grew up outside of Eugene, Oregon.  She didn’t really do many sports growing up, but while in college at the University of Oregon she found Jiu Jitsu through a self-defense class.  As someone with considerable anxiety, the idea of working out or going to the gym never felt safe or empowering. Once she realized that movement could be fun and that her body had innate power, she was hooked. Later that year (June 2015) she started training at Northwest Martial Arts under Ryan Kelly. After graduating from the U of O in 2016 and moving up north, she began training with Hillary.

Sammy likes to incorporate mindfulness at the beginning of warm ups. To Sammy, BJJ is a mind and body sport. It's not always easy to let go of life's frustrations, challenges, and woes. Stepping on the mats and taking those three deep, focused breaths is the first step into warming up both your mind and your body. Sammy said that one reason she loves UJJ is because it's truly a safe space to show up as you are, no matter your skill level, experience, or how you exist in the world. We uplift and support each other- sometimes with our butterfly hooks, and always with our words and actions towards ourselves and our teammates. BJJ is special to Sammy because it's the first form of movement in which she felt safe and powerful. BJJ helped her process painful and traumatic events throughout her life and gave her a community when she felt alone. It has also helped her see responsibility not as a scary thing, but as an honor to uphold. Sammy said that BJJ helps her be the kind of adult she hoped to be and needed when she was younger.

Sammy graduated from the University of Oregon in 2016 with a Bachelor's in Family and Human Services and she currently work as a Prevention Education Specialist with Raphael House of Portland.  Sammy helps lead the kids BJJ program and helps work with new folks when they start training at UJJ.