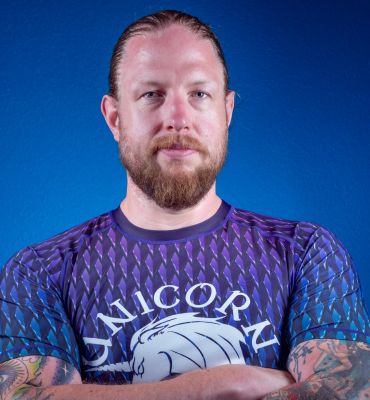 Andrew was born in San Diego, CA, and moved around the country until settling in Portland in the early 1990s.  He began training in Martial Arts at the age of 8, and over the years has studied Judo, Wu Ting Tao and Moo Duk Kwan.  Andrew spent several years studying at a prominent MMA school where he trained under UFC headliners and BJJ champions.  He participated in their coaches program where he spent years learning from some of the top athletes/coaches in the country.

He describes his coaching style as a balance between most students’ desire for fun and cool techniques, grounded with their need of strong fundamentals and real world application.  He also understands the different needs and learning styles of his students. Rather than using a “one size fits all” approach, he is thoughtful to tailor his instruction to best serve the individual in front of him.  Andrew likes to maintain a class environment that is engaging and mentally stimulating to his students, so in addition to getting a great workout, he promises to have you break a “mental sweat” too.

Andrew graduated from Lehigh University with a BA in Philosophy and played on their football team.  He also has 19 years’ experience in the security industry.  When not coaching or working a security job, he enjoys spending time with his family (his wife, Sara, son Asher, and daughter Lydia).