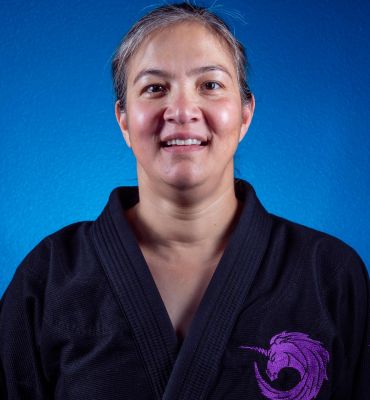 Vikki was born and grew up in Tampa, Florida.  She walked on to the University of Florida track team where she threw the javelin for three years and she also played club rugby at UF.  While in college she took a boxing class, her first martial art, and was instantly hooked.  In 1998 Vikki moved to Miami Beach and found Bonnie Canino’s gym where Vikki took boxing and kickboxing classes and also got to work with Ada “Ace” Velez.  After a short time in Miami, Vikki moved to Atlanta in 1999 and found a boxing gym there where she began competing in USA Boxing matches. During her time in Atlanta is when Vikki watched her very first UFC recording, which was on a VHS tape from the free section of Blockbuster Video.

In 2001 Vikki moved to San Diego where she found her boxing family/friend/coach Tony Palafox.  She went on to compete at the US National Boxing Championships and won bronze in 2002, and then silver in 2003. Vikki was at the maximum age range for amateur boxing and women’s professional boxing had very limited opportunities at the time, so she started to help teach boxing instead of pursuing a professional boxing career.  Vikki helped teach the boxing program at Throwdown gym, which became Victory MMA and Fitness in San Diego.  While at Victory, Penny Thomas (South Africa’s first BJJ Black Belt) starting coaching Vikki in BJJ.  With urging from Penny, Vikki started competing in BJJ and earned her blue belt from Penny in 2009.  Also through Penny, Vikki started training with the legendary Leticia Ribieiro at Gracie Humaita East Bay.  Vikki earned her purple belt from Leticia in 2014.  In 2017 Vikki moved to Portland and began training with Hillary.  She earned her brown belt from Hillary in 2019.

Vikki helps teach classes when Hillary and Brian are out and also helps work with new folks when they start training at UJJ.