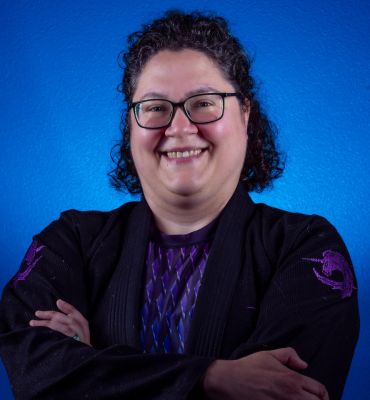 Alex was born in Mexico City, Mexico and has lived in Mexico, Southern California, Texas and Kansas. She has called the PNW home for the last 20 years. She dabbled in sports like soccer, ballet, and volleyball as a child, but didn’t play sports in a competitive way until finding Jiu Jitsu.  Prior to BJJ, Alex was studying Krav Maga for about two and a half years.  Through Krav Maga, she found BJJ.  If it wasn’t for BJJ stealing her heart, she likely would have stayed in Krav Maga.  Alex came to UJJ shortly after we opened after coming to a women’s open mat and meeting Hillary.

Alex came to BJJ at 40 years old, with very little physical training prior to it, and now she cannot imagine her life without it, or without UJJ. Alex believes that this sport is for anyone, and everyone that wants to better themselves physically and mentally. BJJ is both an independent, and team sport. Unicorn offers an open-door policy to anyone interested in BJJ. She said that Hillary, Brian and Andrew all strive to make everyone feel important, and prepared. Hillary stepped in to act as Alex’s coach during my first competition before she had even officially started at the gym.

Alex studied massage therapy but works in office management, a job she has been doing since 2005. She has worked as an office manager in a school setting since 2015, and it’s a job that she loves and feels grateful to “look forward to work” every day! Alex helps lead the kids BJJ program and helps work with new folks when they start training at UJJ.